Before I even begin this post I will beg and plead that you PLEASE do not steal these charts and claim them as your own. It has literally taken me months to collect and find all of this information. If you must post them on a website please credit me as the creator and provide a link to my blog that's all I ask.


Now on with the post, so for the past couple of months I have been working on something, slowly but surely, and I'm finally ready to reveal to you guys just what it is.

I present to you, a list of the all the past Kpop groups starting from 1980 onward.

How To Read The Chart

[The year they debut is in the left black bar as well as along the top and bottom of the chart. The name of the group is in a colored square and a corresponding square with the same color shows the length of time that group has been active. On the right are color letters, BG, GG, M, and D.

If a group started out as a group and then became a duo they were given a group status since that is what they debut as.

Most of the older groups are presumed to be disbanded, but if I could not find a website to confirm it I did not put it.]

(Sorry I had to take screenshots of my excel spread sheet, blogspot does not allow you to upload PDF's.)
(click on the pictures to enlarge them) 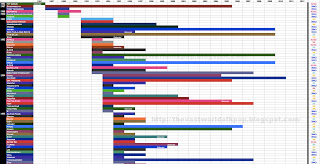 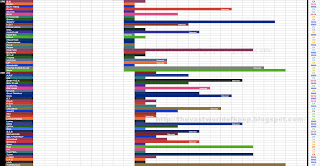 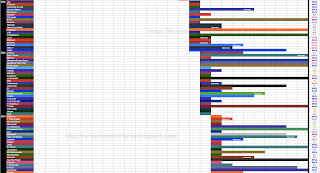 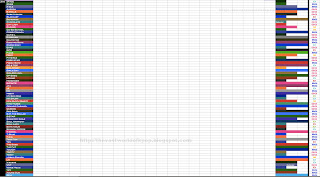 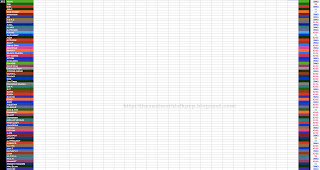 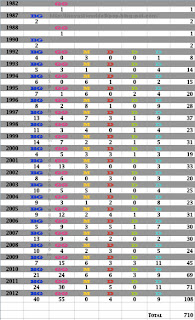 Solo artist and groups that use instruments[aka Bands] are not included on this list, I am making separate lists for those two.

I know without a doubt that a few trot groups and a few bands somehow managed to make their way onto the chart. The trot groups can stay, but if you see a band let me know so I can add them to my other list and take them off of this one.

Sorry I had to plaster my watermark all over it, but I knew people will steal it and not credit me and this took a long time to make so I want my credit.

DISCLAIMER: Allow me to state right now that all the information is not 100% accurate. I also had multiple sources contradicting others on such things as when a group debut or when they disbanded. In those cases if two sites had different dates I went with the year the group released their first album/single. I'm not Korean so I did not grow up with these groups knowing when they debut, so please forgive me if a few of them are out of place. If there is an error in the information I am more then willing to correct it, however you must provide me with a link of some kind that will show me proof of the date you are claiming the group debut in (or some type of proof). Also activity is dictated by albums/singles/mini album releases. If the group last released an album in 2004, but have released songs for OST in 2005, I did not count that as active on the chart, because often OST's will credit an entire group when only two members participated in the OST.

Here are a few fun facts, and fake awards I want to hand out.

1. Mixed groups were really popular early on but the trend has seemed to have died out.

STRANGEST GROUP NAME: It's hard to choose, some of my personal favorites are Mutant, Butt Head, Turtles, and Stony Skunk

MOST ANDROGYNOUS GROUP: Case & Nova. They are a duo who I first thought were both boys, then I thought it was one boy and one girl, and then I found out they were both girls XD.

GROUP WITH THE MOST MEMBER CHANGES: Xing. With a total of 18 members through the groups existence, I think they win the award for most member changes.

These are not really awards just random facts.

I hope international fans find this useful for discovering old school kpop groups. Also I hope this will make fans stop complaining about the large number of rookies that debut each year. As you can clearly see from the chart, as each year has pasted more and more groups have debut and this will continue to happen (unless Korea's economy takes a dive and smaller companies are unable to stay afloat and put out more groups) but more then likely more groups will continue to debut each year.

PLEASE let me know if I left anyone off the list (please remember that this list is for groups only, not solo artist or bands) especially groups from the 1980's.

This is an ongoing project I hope to continue for as many years as I can. I'm looking forward to 2013, let's see if the number of rookie groups can surpass 108.

For The Love Of Kpop
I hope to introduce people to kpop artist that have fallen under the radar. Oh and make lists, lots and lots of kpop related lists. Please excuse the grammar and spelling mistakes. I write these post at 2am in the morning most of the time.